(Your Name Here) and the Argonauts

This is a quick video examination of "(Your Name Here) and the Argonauts" which is a free print and play game. You can download the files from its page on Board Game geek.

Posted by Felbrigg at 8:23 AM No comments:

A board game idea - "hotel"

So the idea of this game is for a two or three player game that I know I will not have time to develop, unless someone wants to pay me to do it of course.

Players take the role of a general dogsbody in a hotel. If a guest needs a pillow you get it, If a room has a water leak, you fix it etc etc.

The board is made up of a cutaway profile of the hotel with three or four rooms per level. A stairwell and elevator give access to the various guest levels from the lobby, which is where the players avatars start. Carefully secreted around the hotel are special rooms that supply the things your avatar might need, such as pillows and blankets in the linen closet, tools in the basement and so on.

Each turn cards are draw from a deck of cards, perhaps one per player. Each card has a guests "need" that the avatars must fulfill. The "need" might be an extra pillow, fixing a water leak, coffee, whatever, and each card has an associated tip that the avatar will get for providing the need. The card is placed on the board in a room space.

Tips can be spent to purchase upgrades to the avatar, such as roller skates that allow them to move quicker. At the end of the game the player with the highest amount of unspent tips will win.

Another feature of this unfinished idea includes take-that upgrades, that allow you to slow your opponents by setting banana skin traps, locking the supply room etc.

Well, that's the idea. Unfinished, unpolished. Now it's out of my head, hopefully I'll be able to sleep tonight

I'm an author, I write adventure game books.
Posted by Felbrigg at 4:06 AM No comments:

I've been pondering another Leg End Mary (Legendary) game this time based on the classic TV series "Sapphire and Steel".

So I've been mocking up card layouts . 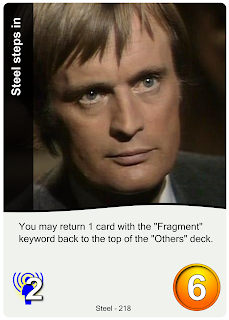 I've thinking of having a base set of cards, and then "assignment packs", with each assignment pack providing the location, enemies, events and additional cards for the Sapphire and Steel mini decks that are only used in that mission/assignment. Other mini decks too, for Lead and Silver etc.﻿

I'm an author, I write adventure game books.
Posted by Felbrigg at 12:23 PM No comments:

I've launched a kickstarter to raise funds to purchase art for a card game I've designed. I could go on about how great it all is, but what's the point! Check out the Kickstarter page, watch the video and see if you'd like to help getting this project off the ground.

It's got Mecha in it!

I just published a free to download print and play game based around The Princess Bride. Details on one of my other blogs....

I'm an author, I write adventure game books.
Posted by Felbrigg at 11:26 AM No comments:

Another of my solo plays of Memoir 44. Not many left in the base game, then I'll have to move onto the scenarios in the expansions...

I'm an author, I write adventure game books.
Posted by Felbrigg at 5:06 AM No comments:

Hogarth's Heroes is a Traveller one-shot scenario for 1-5 players. Designed to be played in a single session. The PCs find themselves as part of a mercenary company.

The job looks simple, foward observation and the direction or Ortillery (orbital artillery). Then things start to go wrong. A mysterious light in the sky, comms failing, an enemy convoy, hunting dogs, and swarming militia. The party must escape and evade.

I'm an author, I write adventure game books.
Posted by Felbrigg at 4:32 AM 1 comment: